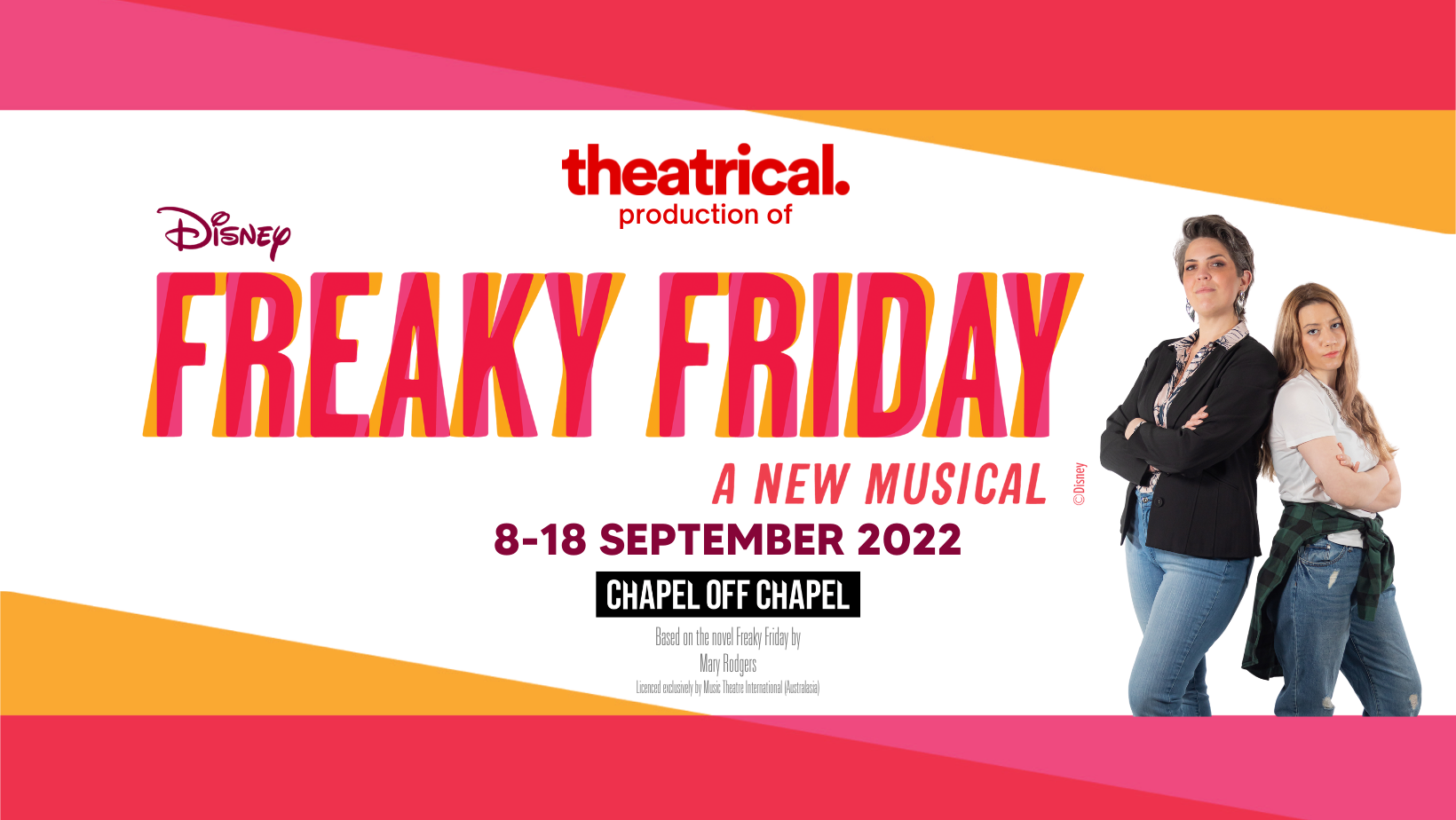 The new musical, Freaky Friday, based on the beloved 1972 novel by Mary Rodgers and the hit Disney films, features a book by Bridget Carpenter – the co-executive producer and writer on the beloved TV hits, “Friday Night Lights” and “Parenthood” – and music and lyrics by Tom Kitt and Brian Yorkey – the Pulitzer Prize-winning composers of If/THEN and Next to Normal.

When an overworked mother and her teenage daughter magically swap bodies, they have just 24 hours before Mum’s big wedding to put things right again. Freaky Friday, a new musical comedy based on the celebrated novel by Mary Rodgers and the hit Disney films, is an hilarious, contemporary update of the classic story, in which a mother and daughter see what it means to be a family while experiencing each other’s lives firsthand, if only for a day.

Set in the present day, Freaky Friday features a tuneful pop-rock score, befitting a work that has effortlessly updated throughout its several iterations. Warmhearted, humorous and touching, this fresh take on the classic story is perfect for family audiences of all ages.

Book by: Bridget Carpenter  Music by: Tom Kitt  Lyrics by: Brian Yorkie
Based on the novel Freaky Friday by Mary Rodgers
and the Disney films
Licensed exclusively by Music Theatre International (Australasia)

Tom Kitt
Tom Kitt is the composer of Tony Award Nominated If/THEN. He also composed Next to Normal for which he received the 2010 Pulitzer Prize for Drama as well as two Tony Awards for Best Score and Best Orchestrations for Next to Normal. Next to Normal also received the Outer Critics Circle Award for Outstanding New Score. He is also the composer of High Fidelity (Broadway); Bring it On, The Musical (co-composer with Lin-Manuel Miranda, Broadway); Superhero (2nd Stage); Disney’s Freaky Friday (Stage Production and Original Disney Channel Movie Musical); Dave (Arena Stage); The Winter’s Tale, All’s Well That Ends Well, and Cymbeline (The Public’s NYSF); From Up Here and The Madrid (MTC); Orphans (Broadway) The Retributionists (Playwrights Horizons) and As You Like It  (Toho Co., Japan). As a music supervisor, arranger, and orchestrator, credits include Jagged Little Pill; SpongeBob Squarepants, The Musical (Tony Nom., Outer Critics Nom, Drama Desk Nom.); Head Over Heels; Grease Live!; Rise (NBC); and American Idiot. His work with Green Day also includes additional arrangements for their Grammy Award-winning album 21st Century Breakdown and their album trilogy, ¡Uno! ¡Dos! ¡Tré! Tom received an Emmy Award as co-writer (with Lin-Manuel Miranda) for the 2013 Tony Award opening number, Bigger. Other Television Songwriting credits include a musical episode of Royal Pains, and songs for Penny Dreadful, Sesame Street, and Julie’s Greenroom. As a musical director, conductor, arranger and orchestrator, credits include the Pitch Perfect films, 2Cellos featuring Lang Lang (Live and Let Die), The Kennedy Center Honors, 13, Debbie Does Dallas, Everyday Rapture, Hair, Laugh Whore, Pippin (Deaf West), and These Paper Bullets. Upcoming projects include musical adaptations of the films Almost Famous, Magic Mike, and The Visitor.

Brian Yorkey
Brian Yorkey received the 2010 Pulitzer Prize for Drama, as well as the 2009 Tony Award for Best Score, for Next to Normal. Brian is currently the Executive Producer and Showrunner of 13 Reasons Why for Netflix, Paramount Television and Anonymous Content.

Brian was also nominated for the Tony Award for Best Musical and Best Book of a Musical for Next to Normal, and his work on the show earned him the Outer Critics Circle Award for Best Score. He partnered again with the Next to Normal team on If/THEN (Tony Award Nominee for Best Score) starring Idina Menzel. Brian co-wrote the libretto for The Last Ship (Outer Critic’s Nomination, with John Logan), with a score by Sting. His musical adaptation of Freaky Friday for Disney Theatricals enjoyed a National Tour before being adapted into a Disney Channel Original Movie. Current theatrical projects in development include the original musical Jesus in My Bedroom, with composer Tim Symons, as well as stage musical adaptation of Magic Mike.

Additional theatre credits include Making Tracks, which has played off-Broadway and regionally, the musical adaptation of Ang Lee’s The Wedding Banquet and the play, Book of Jobs with Alex Glover. Brian has directed off-Broadway and regionally and for seven years was associate artistic director at Village Theatre in Washington state, one of the nation’s leading producers of new musicals.

He’s a graduate of Columbia University, where he was artistic director of the Varsity Show, an alum of the BMI/Lehman Engel Musical Theatre Workshop and a proud member of the Dramatists Guild and the WGA.

BridgetCarpenter
A playwright, television writer, and producer, Carpenter created the 2016 miniseries “11.22.63” for Bad Robot and Hulu from Stephen King’s bestselling novel. “11.22.63” premiered at the Sundance Festival, was nominated for a Writers Guild Award, and won the Saturn Award for best limited series.

Prior to “11.22.63,” she wrote and co-executive-produced all five seasons of the Peabody Award-Winning series Friday Night Lights. She was a Consulting Producer for HBO’s Westworld and a Co-Executive Producer for Parenthood. In 2013 she was the Executive Producer/Showrunner for the Sundance Channel drama series The Red Road.

Carpenter’s plays have been produced by Steppenwolf, the Public Theater, the Alley Theatre, La Jolla Rep, Berkeley Repertory Company, Oregon Shakespeare Festival, and many other theaters across the country. She has written several songs for film (Basmati Blues; Dear Dumb Diary) and has adapted Freaky Friday as a movie musical for the Disney Channel, airing in 2018. Most recently, she was awarded the Princess Grace Statue.

Mary Rodgers
Mary Rodgers’ credits as a composer began with the B’way production of Once Upon a Mattress in 1959 and continued with Hot Spot, The Mad Show, Working, The Griffin and the Minor Canon, and scores for the Bil Baird Marionettes and Theatreworks/ USA. Her musicals have also been celebrated in a revue, Hey, Love. She is a popular author of fiction for young people, most notably the 1972 novel Freaky Friday, which was made into a Disney Studios motion picture (with a screenplay by Rodgers), a Theatre Works/USA musical (composed by Rodgers) and an ABC TV remake. Mary Rodgers is Chairman of the Board of the Juilliard School, on the Board of ASCAP, and on the Council of the Dramatists Guild.

Freaky Friday will be playing at Melbourne’s iconic Chapel Off Chapel from 8-18 September 2022.

For ticket bookings and box office enquiries please contact Chapel Off Chapel on 03 8290 7000 or chapel@stonnington.vic.gov.au